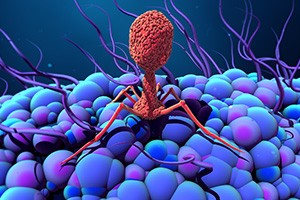 Microbiome engineers are seeking tools that are specific enough to home in on the bacterial population of interest with uncompromised precision. That is exactly the promise behind bacteriophages.

Bacteriophages (phages) are viruses that infect bacteria and are their natural predators. Like most viruses in nature, phages evolve to kill their host by binding them specifically and injecting their own genes (DNA or RNA). With a huge leap in basic research and skyrocketing funding, microbiome companies are choosing a phage-based approach to specifically target bacterial pathogens as “non-traditional antibiotics”.

The idea of using phages to cure infections is not new. In 1919, the French microbiologist Felix d’Herelle used a phage cocktail to cure a 12-year-old boy with severe dysentery, and in the 1920s and 30s phage research continues worldwide in pursuance of bacterial infections therapeutics. However, Phage therapy fell out of favor in the U.S and most of Europe with the arrival of antibiotics. Decades later, as humanity is heading for a post-antibiotic era [Read more on “Antibiotic Resistance Crisis”], scientists are using two main strategies in developing phage therapeutics:

In this strategy, the therapeutic agents are phage-particles that naturally evolved to specifically wipe out the bacterial strain that causes the infection. This approach is a laborious process, as it requires constant pursue after new phages that will match each adversary pathogen.

This strategy has emerged in recent years as a new and exciting field. Phages can be genetically engineered, and so scientists are using the piling up knowledge from basic research to engineer phages with a broader host range and different therapeutic mechanisms.

In the last few years, there is a growing number of clinical trials that provide evidence to the safety of phage therapy with initial efficacy data. In addition, many independent successful compassionate treatments have saved people from otherwise lethal infections. The growing interest in phages as a potential therapeutic approach necessitates addressing the challenges that still hinder the utilization of phages as effective therapeutics, mainly the ability to develop effective broad host range capabilities and avoid the development of resistance by bacteria to such treatments. Strategies that overcome these challenges have a strong potential to become successful new therapeutics.

Back to the blog page
Font Resize
Contrast
Accessibility by WAH